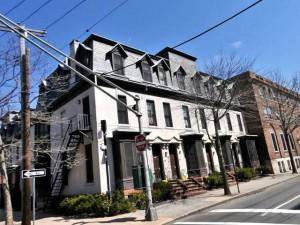 313-319 Crown is a 2 ½-story building on the corner of York Street and Crown Street. The entire building consists of four separate units connected to each other, each with a separate entrance designated by a sandstone stoop, hooded entry, and delicate iron rails. The exterior of the building is white, with a slate mansard roof. The mansard roof is accented by a molded curb-line and cast-iron cresting, and a center pavilion that gives the roof (that spans the full width of the building) a focal point. The ground floor has 8 bay windows spaced across the width of the building, one square bay on the left and right edge of the building respectively, and canted bays in between. According to a 1945 surveyor’s map, exterior walls are 12” brick, interior walls are 8” brick, and stone foundation walls are roughly 18”. The current assessed value of the 0.1 acre parcel is $673,260.
Built in the late 1800s, each of the four units in this building originally functioned as a single-family home. New Haven directory listings indicate that each unit was occupied by a single resident or a married couple. Residents appear to have been drawn from the industrial and working classes, including such professions as a New Haven Gas and Light Co. employee (1913), a dressmaker (1913), a nurse (1920), a molder (1935), and a factory inspector (1955). According to New Haven directories, some residents rented out extra rooms in their units, but by the 1950s they appear to have been formally divided into separate apartments, as multiple residents from different families appear under each address. By the late 1960s there were as many as seven separate residents listed for each address. In the early 1970s the property was purchased by Yale University and underwent a significant renovation and rehabilitation circa 1975. This included a standardization of the interiors, which today all have carpeting, vinyl tile flooring in the kitchens and bathrooms, and mini-blinds in the living room and bedroom windows. After this process was completed, the apartments were opened up as graduate student housing, and today there are 22 apartments: five efficiencies, sixteen one-bedrooms, and one two-bedroom unit. Residents enjoy basement storage and laundry, and a courtyard which facilitates small gatherings and social events.
Sources:
New Haven Museum Architectural Records
New Haven City Directories
Sanborn Fire Insurance Maps, Yale Collection
http://www.yale.edu/gradhousing/housing/york_crown.html
http://data.visionappraisal.com/newhavenct/findpid.asp#closest