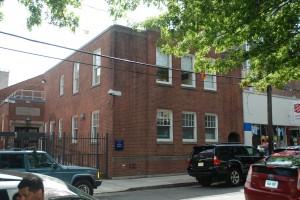 The site in which the A+A library currently sits was originally developed as a residential dwelling beginning in the early to mid 1800’s. In 1836 Ira Atwater sold the property to Ralph Marsh whom them sold it to Wilson Booth in a period prior to 1861. According to my research, Wilson Booth is most probably the first resident of the site. He moved to New Haven in 1819 and was a builder who directed the construction of many dwellings and churches in New Haven and in neighboring Townships.
Wilson Booth died in 1888 and was buried in Grove Street Cemetery (I have not ventured there to prove it), and in his will left 270 Crown to his daughter Sarah Elizabeth Booth whom at the time was known as Sarah E. Champion. Sarah E. Booth married Henry Champion in 1863 and was widowed in 1867 at the age of 35. In 1896 she authored Our Flag: Its History and Changes from 1620 to 1896, a children’s book which provides illustrations and a history of the evolution of our flag. She published articles in “The Connecticut Magazine: An Illustrated Monthly” and was also a member of the Wooster Chapter of the D.A.R. She died on Mar.11,1917 and left Albert S. Holt as the executor and I believe she left the home to The United Society of New Haven. In 1919, the Katz & Mullen Co. took over the title of the property. The property was leased for one year to the Y.D. Veteran’s Association. In 1922 Dorscht Lodge #2 took over the title of the property. The Dorscht Lodge seems to have been a musical club and it was owned by Louis Felsburg in 1913. The Dorscht club was originally on 139 Orange St. and the members every 1st and 3rd sunday of the year. Louis Felsburg resided at 171 Bradley and worked at Aschenbrodel Verein Inc. at the time. He died in 1925 in which his wife was the executor of the will and the new president was Ferdinand Reichel who gained partial ownership of the property. The owners were all a part of Two Seventy Crown Incorporated and are Ferdinand Reichel, Amelia Reichel, Charles J. Kul, Alfred Calienno, and Adam Hess.
The most notable changes to the original dwelling plan began with the ownership of the Dorscht Lodge Club. These changes can be seen in the Sanborn map of 1924. The structure was extended to the limits of the lot away from crown street. On this same map changes can be seen along the rest of the structures of Crown Street. In 1927, Dorscht Lodge #2 foreclosed to the Citizen’s Bank & Trust Co. In 1930, the Dorscht Club got the title deed once again for 270 Crown Street and it was foreclosed once again in 1937. According to data from 1935, the Dorscht Club no longer met at 270 Crown but instead now met at 301 Crown St.
According to the Dana Collection at the New Haven Historical Society, the Fraternal Order of the Eagles now took residence at 270 Crown St. The Fraternal order of the Eagles is a non-profit organization that “unites frater- nally in the spirit of liberty, truth, justice and equality, to make human life more desirable by lessening its ills” and was originally formed by 6 theater owners. They were competitors who had come together to discuss a musician’s strike. It’s earliest members were usually actors, stagehands and playwrights and they usually met on local theater stages, afterwards they would just socialize and drink beer. According to the 1973 Fire Insurance Map, the FOE club still had met at a portion of 270 Crown St. There is no longer an FOE meeting place in New Haven but there are some in neighboring cities.
Some time shortly after FOE resided at 270 Crown, Haskins Laboratories took residence there. They conduct research of both written and spoken language. They were located at 270 Crown just prior to the temporary relocation of the Yale Art and Architecture Library.
Neighborhood:
Downtown