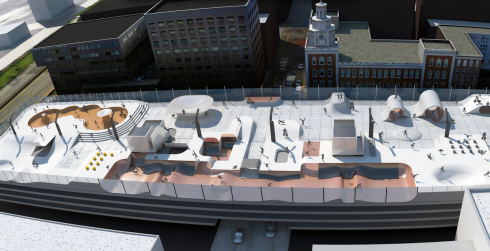 Urban Platform
New Haven is a city known for its historic planning, picturesque churches, famous parks, Gothic architecture, secret societies, pizza restaurants, and Yale University.  New Haven is also known for its parking garages.
They’re huge.  They’re monolithic.  They’re looming reminders of  the visionary past.  Their roofs exist as deserted urban platforms offering some of  the most sweeping views of  New Haven.  And the views are free of  charge.
Can this prime real estate serve a function in the afterlife of  these behemoths?
Occupancy
Over Spring Break, Brandon Hall and I gathered garage occupancy data for the three main garage structures near Crown Street: the Temple Street Garage, the Crown Street Garage and the Chapel-York Garage.  The targeted periods of  data collection included a workday afternoon, a workday evening, a weekend afternoon and a weekend evening.
To our surprise, the named order of  the three garages above is the exact order of  decreasing car space capacity and of  increasing occupancy.  That is, The Chapel-York Garage, which is the smallest of  the three, exhibited the highest occupancy during the workdays and the weekends.  It had the most number of  floors at full capacity during all measured periods.
The Temple Street Garage exhibited the most lackluster results.  Although it has the second highest capacity in the city (after the Air Rights Garage), it is incapable of  maintaining customers aside those working in the area during normal office hours.  Although this garage did experience some evening usage, critical occupancy beyond the lowest parking levels was weak.  This garage is curated for the migratory day workers of  New Haven.
The Crown Street Garage exhibited hybrid results.  It catered to workers during the workdays and to those heading to bars and clubs on the evenings and weekends.  This garage serves these two types of population.
Differences aside, all three garages possessed an identical weakness.  Even during the very busy workday afternoon, rooftop parking was nearly empty, while the floors below reached full capacity.  The top levels effectively turned into deserted platforms.
What is a viable and an iconic design intervention for these underutilized elevated urban podia?
The Intervention
Urban New Haven has something for everybody, that is, aside the youth.  While the city does have some drawing power for the young generation, the allure is fleeting and limited at best.  There are no (remaining) malls, playgrounds, public pools, or places in which to simply “hang out.”  Once the classes of  the Cooperative Arts and Humanities High School end, the youth migrates out for the remainder of  the day.  The city wields little power in retaining this generation.
Skateboarders comprise the one group of  kids who embark on journeying into the city after school, but the range of  their activities proves constrained as well.  The lack of  public skating spots and non-trespassing obstacles fail to draw these urban explorers beyond the cramped paved area surrounding the World War I memorial of  the lower New Haven Green.  The eight angled benches around this memorial constitute perhaps the only skating spot in downtown New Haven.  A “skatepark” does exist in the city, but it is situated in a suburb over two miles northwest of  the Green and is adjacent to a cemetery.  This skatepark is underwhelming in size, design and its resultant excitement levels.
To attract and retain city youth, the downtown of  New Haven needs a viable destination.  It needs an attraction that is inviting and encouraging to the young urban explorers.  It needs a skatepark, and a cool one at that.  An iconic skatepark that not only draws on the local population but places New Haven on the map as a national destination.
The underutilized rooftops of  the New Haven garages, particularly of  the Temple Street Garage, constitute the most ideal platforms for an urban skatepark.  They’re huge, structurally stable edifices that are waiting for a new lease on life.  Why not re-envision them as a skatepark?  The following pages visualize the Paul Rudolph designed garage rooftop as a dream destination for skaters.
Tagged as:
parking garage