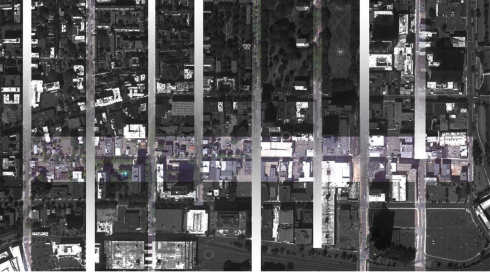 Crown Street in New Haven has many faces: hub of regional clubbing activity, magnet school locale, old industrial buildings turned loft conversions and arts district, Yale back-of-house, urban renewal test tube baby, and innumerable others, including its epicurial sampling.
If we are to think of the street as a slice of the city, each cross street has the role of myriad cross-sections into what makes New Haven what it is.
And so I wondered, what makes these cross streets unique or significant? I would propose that they really hold weight in part because of the transportation network, and Crown Street is as defined by the way one circulates through it as by the identities that I listed earlier.
Crown Street is the one-way doppelganger to Chapel Street, and because it is capped at either end, it is the lesser of the two  as far as vehicular traffic is concerned. Crown Street also has a strong vehicle to pedestrian flow (so people parking and walking to eateries, bars, and clubs). Finally, the street is affected by the biased visibility and in-betweenness that is a result of the one-way network, and it may be possible to trace the effects of traffic and transportation on the development of sections of the street and in comparison to the Chapel and George arteries on either side.
Urban Renewal and the automobile brought about these effects. In The Mayor’s Game by Allan R Talbot, he details the “road not taken” in urban renewal, at one point writing, “the effect of the road on the driver is paramount; the impact of the road on  the land is of minimal concern.”
The one way street network, designed  in part by William R. McGrath for the city of New Haven, was manipulated by street lights to give drivers incentive to use particular streets and to halt traffic from zipping through residential neighborhoods (think Orange Street).
Tagged as:
transportation
urban renewal
one-way streets