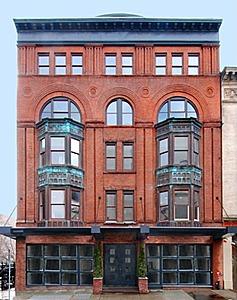 The original 116-120 Crown Street was, according to the 1886 Sanborn Fire Index Insurance Map, a block that consisted of two residential townhouses. According to real estate documents in the Yale Sterling Memorial Library archives the Eld family of New Haven owned the property until they sold it to Frank Maylinger in 1894.

The main tenant of 116-120 Crown has been the Hotel National, which opened its doors in 1912 and closed around 1983-1984. Judging from the surrounding buildings of 116 Crown, which included billiard clubs, saloons, restaurants, and nightclubs, one can conclude that the 100’s section of Crown Street was a place for men and their “vices”. This conclusion would lead one to believe that The Hotel National was a SRO (single room occupancy) hotel, housing single men working industrial jobs and manual labor. This section of Crown was most likely for men who were transient journeymen, searching for day-to-day work and seeking solace at night through various sorts of entertainment such as drinking and gambling.

Tenants who shared the space with the National Hotel vary from the Grenon Bros. Saloon (1915) to an electrical company (Goldforb and Schultz electrical contractors, 1925) to a typewriter company (The New England Typewriter and Stationary Co., 1980-1995). The variety of stores that have inhabited 116-120 Crown show the building’s flexibility in reacting to the environment and inhabitants around it.

From the National Hotel’s closure in the mid 1980’s to the early 2000’s, the block that 116 Crown Street is situated on went through difficult times judging from the amount of adjacent vacant lots and the vacancies within 116-120 itself listed in New Haven directories.  The only businesses that endured through these tough times were Jim’s Sandwich Shop (1980-1995) and The New England Typewriter and Stationary Company.

According to a YDN article circa 2001, between 1995 and 1998 a fire erupted at 116-120 Crown and badly damaged the building. The city of New Haven came to possess the building in 1998 due to a series of foreclosures. In 2001 The Anderson Wilcox Corporation, a development and restoration company based in Branford, CT, purchased and renovated the property in order to create lofts and a ground floor restaurant. The vision was a success. Today the top four floors consist of lofts (including a recently added fifth story penthouse) and the ground floor is home to the restaurant “116 Crown.”

Other Images and Visual Resources: